I was lucky enough to attend ElixirConf.EU for the third time and in this post I’m sharing some thoughts about the talks I saw, some of my notes and insights on the future of this community in general.

I’d never visited Prague before and the conf was an amazing opportunity to combine business and pleasure. While writing this post though, a week after, I realised I didn’t visit most of the landmarks that I was planning to. Looks like I was immersed in the vibe of the city and had a great time there 😀.

In the few nights spent in Prague, I picked out the following places, which I wholeheartedly recommend:

Now for the Czech cuisine, I don’t remember much, but the bread dumplings (Knedlíky?) and the guláš were quite tasty. The beer on the other hand didn’t match my taste.

Spacious, clean and only a short commute from my staying.

The talk was about broadway, a new open source project by Plataformatec aiming to streamline data processing pipelines.

The presentation started with a short history of steps towards the goal of making collections from eager -> lazy -> concurrent -> distributed.

The issues with it are that it’s:

A better abstraction was needed and thus GenStage was born.

It was inspired by Akka streams and the Akka team was helpful and answered many questions.

Some of the companies using GenStage in production:

Surprisingly in the audience 2 or 3 people raised their hands when José asked who’s using Broadway already in production.

Want to contribute? Write a producer.

Q. Can I build a producer in another language?

Totally doable as long as there’s a API for that external app.

Q. Is there an overlap between Flow and Broadway?

Flow focuses on data aggregation. Broadway is about the individual messages and not the data as a whole.

I’m really looking forward to use broadway in some project, it might be the perfect abstraction for some of the problems, I’m solving over and over from scratch.

Q. Is the goal to replace RabbitMQ or Kafka?

No, it’s to work with them and become very good friends.

The talk was a case study of adopting Elixir at Telnyx. Telnyx aims to be like AWS but for telcos. 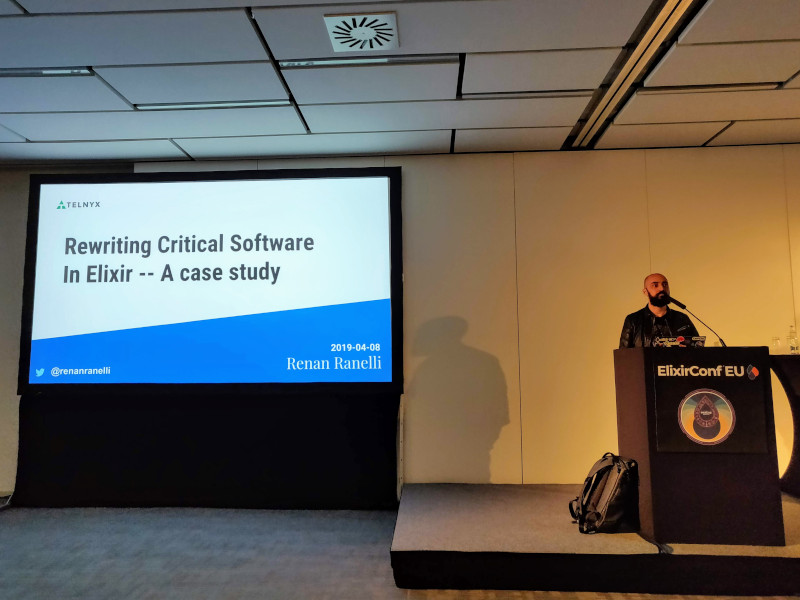 They went to rewrite a dialplan service which was originally written in Python to Elixir.

Python is notoriously harder to scale vertically & horizontally than Elixir

Characteristics of the service:

The migration to the new Elixir service was challenging, since changes kept being made in the Python codebase, making it a race for feature parity.

They approached the problem by routing production traffic to both the existing Python service and the experimental Elixir one, capturing the responses and diffing them, to verify compatibility.

They used the responses to automatically generate regression tests.

For them, the experiment was successful as parallelisation was ridiculously simpler and cheaper with Elixir.

This talk was about Tortoise, an MQTT client for Elixir. 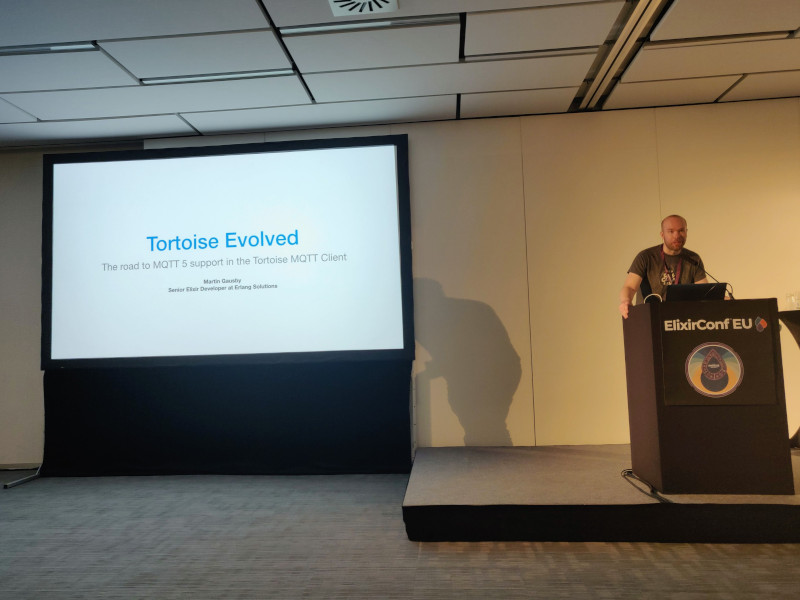 You publish messages in topics. Topics are namespaced using slashes, for example ocp-tower/2/temperature. A client can subscribe to messages using topic filters.

Then publish a message:

I wanted to ask, if there’s plan for a Broadway producer in Tortoise, but I completely forgot about it.

Let there be light - Michał Muskała 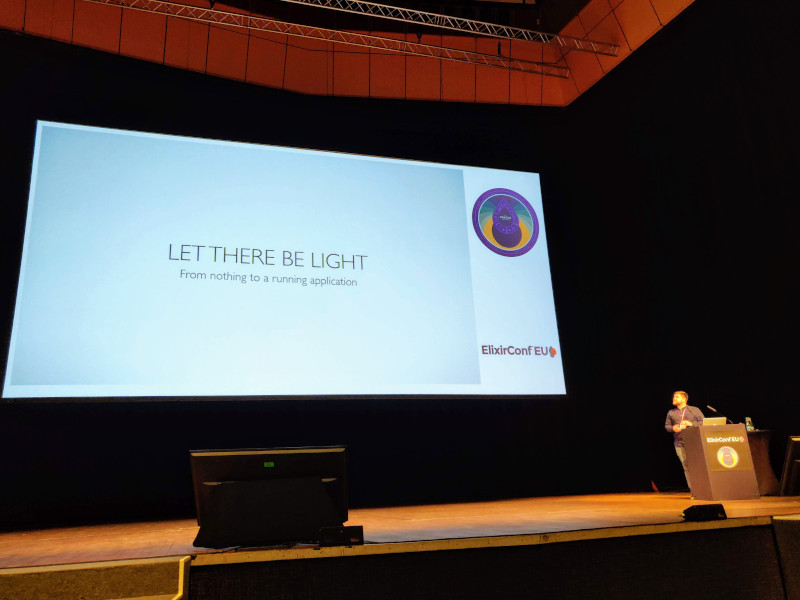 This talk tries to explore the necessary steps for an Erlang application to boot.

For me this was the most insightful and true talk of the conference. No marketing talk, not another success story. Digging into the core of the system, trying to see how it works. I love code exploration talks. You can learn so much from them.

By the way the brewery (link), where the above photo was taken is awesome. 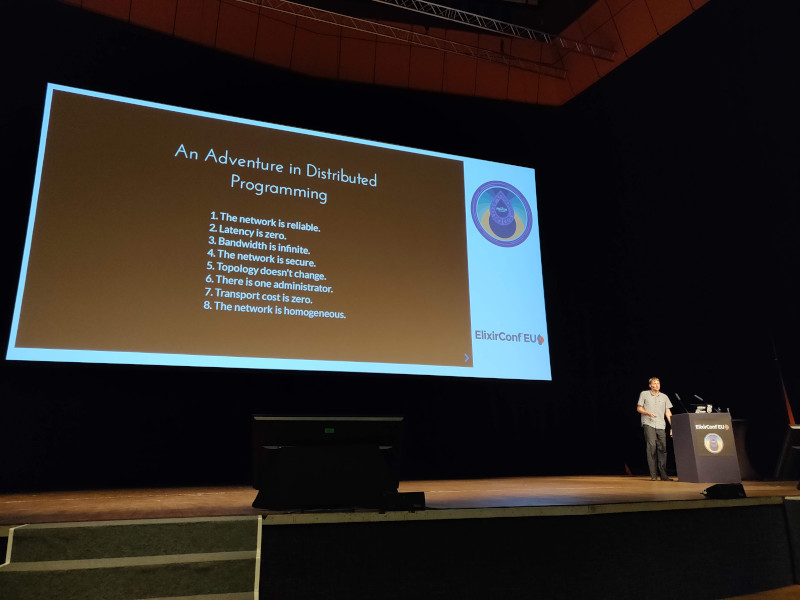 This talk was about Planga a chat application and the challenges they faced building it. The app is open-source.

There were references to:

Planga’s working on an Ecto adapter for Riak, see here.

Projects to Check out

Q. CRDTs. How do you use them? Any patterns?

It depends what you’re trying to abstract. We use Riak CRDTs which I believe use delta-CRDTs.

Q. Why did you stop using Mnesia?

The Ecto adapter was far from perfect and also we wanted a DB which doesn’t live in the node.

Alternate Title: “How to boot your apps correctly”

An ability to recover from or adjust easily to misfortune or change.

A group of interacting, interrelated, or interdependent elements forming a complex whole.

…complex systems run as broken systems. The system continues to function because it contains so many redundancies and because people can make it function, despite the presence of many flaws… System operations are dynamic, with components (organizational, human, technical) failing and being replaced continuously.

Scaling is a problem of handling failure

This is why Erlang is so good at scale.

You have to treat humans as first-class citizens.

Don’t use mix for runtime config.

To watch for the health of your system’s components, you can use alarms.

When communicated with other services, you may want to use circuit-breakers. For BEAM projects fuse is the go-to library.

Lessons From our first trillion messages with Flow - John Mertens

John is a principal engineer for https://change.org It’s written primarily in Ruby, but they started adopting Elixir in 2018.

This is an example of how they use Flow:

With the help of pattern-matching they can handle a variety of data:

A glimpse of Broadway from change.org’s codebase: 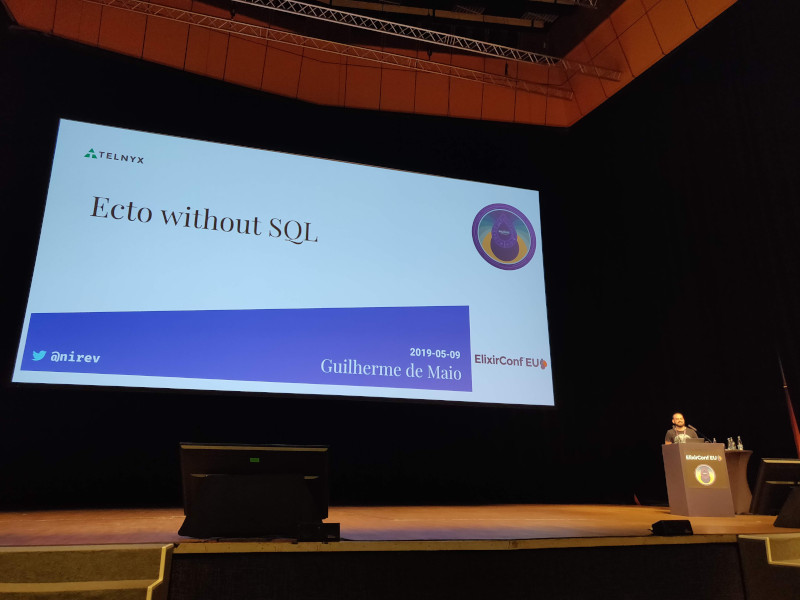 It turns out [Ecto][ecto] is more than a database library for Elixir.

the main modules of Ecto are:

You can use Ecto without SQL. By defining an adapter.

You may use changesets without Repo for validations. Example:

This is a way to get a consistent error handling strategy for controller actions. 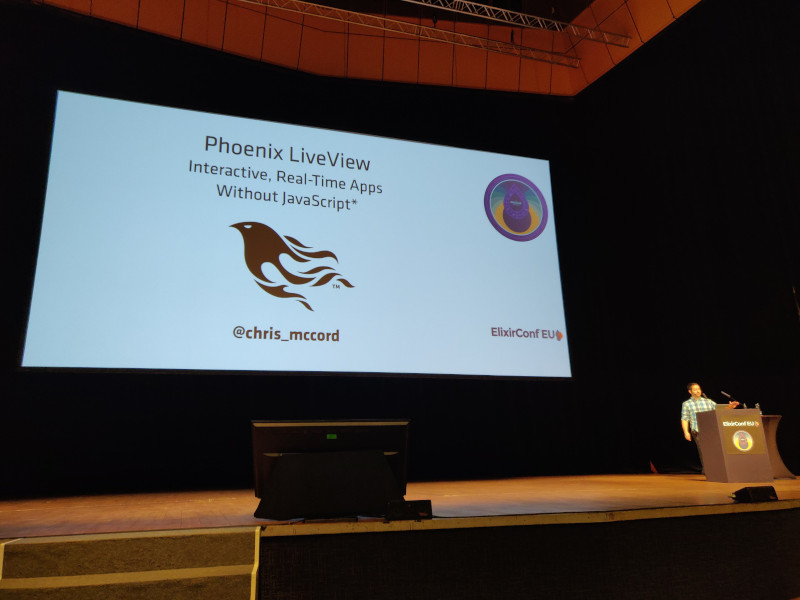 The idea is to be able to write interactive, Real-Time apps that are “scriptless”, meaning that you don’t have to write any JavaScript.

Imagine my surprise and excitement when Chris opened a browser tab with the first demo, which I wrote 🥳 You may read my previous post about that.

He said, they’re going to be able to use LiveView to lift information out of the VM and produce the Phoenix Telemetry integration.

For more demos, guides and tutorials about LiveView, check out this list.

So Chris said that LiveView isn’t going to replace SPA frameworks. For example one wouldn’t write google docs, or google maps using LiveView. However there’s many simpler apps which can be written with LiveView, avoiding the rabbit hole of complexity of client-side development.

LiveView is a new paradigm questioning some of the existing techniques for developing interactive apps. Imagine building an interactive thermostat UI like this one. You’d need to code:

Where the EEx part of it, can be extracted to a separate file.

An important aspect of app development with LiveView is failure isolation. With a JavaScript application, an exception, unless rescued would freeze the UI. However with LiveView a process isolates failure and restarts a view with a known good state.

LiveView uses morphdom to optimally update the DOM with the changes pushed down the web socket. LiveView tries to push only the changes in the state and positions in the markup to be updated.

In the future the ability to throttle keyboard events will be added and there’s an open issue for that.

With code like the following, you can test-drive your statefull actual running process without a browser.

Q. WebSockets don’t work in some cases where there are proxes

You can give it the longpoll option

Q. What about working on an open standard?

It would impede development. We can get to specify it at some point. Too early to say.

Q. Does it work without JS (for SEO)?

If you curl it, responds with the expected HTML, so yes.